It is believed that it was the rough northern Norman warriors who in the 11th century began making a wonderful light wine from sour apples, which was pleasantly intoxicating, but left the mind clear.
Today, cider is a low-alcohol champagnized fermented apple juice of a characteristic golden color with a light aroma. The place where it is made and sold is called the cider mill, or sidreria. In the past, connoisseurs of cider went to such establishments in search of the most delicious cider. To attract more customers, visitors were served a good lunch, and if they liked the cider and bought it, they did not have to pay for the meals.

The ancient Celts believed that cider came from the afterlife, where peace and eternal youth reign. They believed it was purer than water, so they often baptized children in it. However, not everyone could afford such extravagance.

Then the culture of drinking cider in the company of good friends was born. It’s no wonder, considering that in Europe cider mills were located in the mountains, because cider does not tolerate high temperatures. Therefore, connoisseurs of this drink went to those establishments only with reliable friends.
Warm scarves, socks and sweaters had to be worn because of the chilling atmosphere in the cider mills. This custom has survived to this day, except that now you can be offered a blanket. The last sip of the drink is poured on the floor, because of a small precipitate that may form at the bottom of the glass. That’s why sidreria’s board floor is usually covered with a thick layer of sawdust.

Royal Fruit Garden is the first and so far the only company in Ukraine that produces cider from its own raw materials. Apple orchards with specially selected six varieties of apples grow in the city of Zolotonosha, Cherkasy region, on 162 hectares. This is where the best product is created – apple wine without flavorings, alcohols and preservatives. 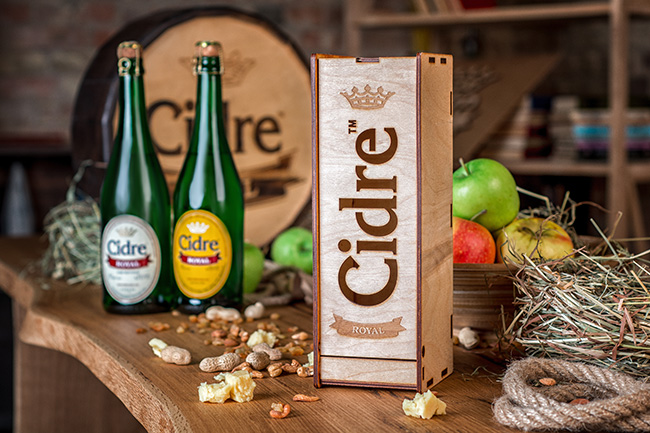 Interestingly enough, this drink was previously consumed only by noble people, who preferred it to champagne. It was believed that cider drinkers

where sophisticated and refined. Less than 200 years later, this tradition began to return with the only difference that cider is now affordable to everyone.
The taste of the drink depends on how it is poured into a glass. To fully uncover the bouquet, it is poured from afar, so that it is saturated with oxygen and reveals its true flavor. To simplify this ritual, a special device was invented in Spain for proper pouring, called escanciador. By the way, the Spaniards often use cider in cooking. For example, to prepare various desserts and sauces.

Few people know that cider has a very close relative – calvados. This apple brandy is produced by distilling cider and aging it in oak barrels.

Royal Fruit Garden cider can be enjoyed with snacks or as a self-sufficient drink. Let’s look at its diversity.