Cider Magnum Sekt is the elite among ciders

Cider Magnum Sekt is the elite among ciders

2021 was a year of breakthroughs and discoveries for Royal Fruit Garden.
The company has created an innovative product that has become a breakthrough in the cider market – Cider Magnum Sekt.

It all started in 2020, when Royal Fruit Garden purchased equipment that allowed to start the production of cider by the so-called Charmat method (prosecco drinks), the first of its kind in the world

We decided to ask the General Director of the company Ye.Yu. Molodtsov about all the features of this product.

– What kind of cider is it? Is it domestic or imported?

-Magnum Sekt craft cider was created by order of the international company Royal Fruit International for the markets of Ukraine and the EU.

This cider has it all to become the absolute leader in the craft segment:

– Apples from which the juice is made are grown in the Company’s own orchards. Before “getting into the bottle”, they are carefully sorted and checked for compliance with the technology. The presence of apples of “random” varieties, not to mention the “reconstituted juice”, is simply excluded.

– But is it made just like any other cider?

– NO! Traditional cider technology has only one stage of fermentation. When creating Cider Magnum Sekt, we used double fermentation technology. It is the secondary fermentation that renders the cider its characteristic and natural sparkling (sekt), which winemakers are often proud of.

– So Cider Magnum Sekt is almost a sparkling wine?

– Yes, and no. YES, because the production technology of our cider and, for example, classic prosecco is almost identical. And of course NO, because we are talking about cider – wonderful, fragrant and 100% apple! 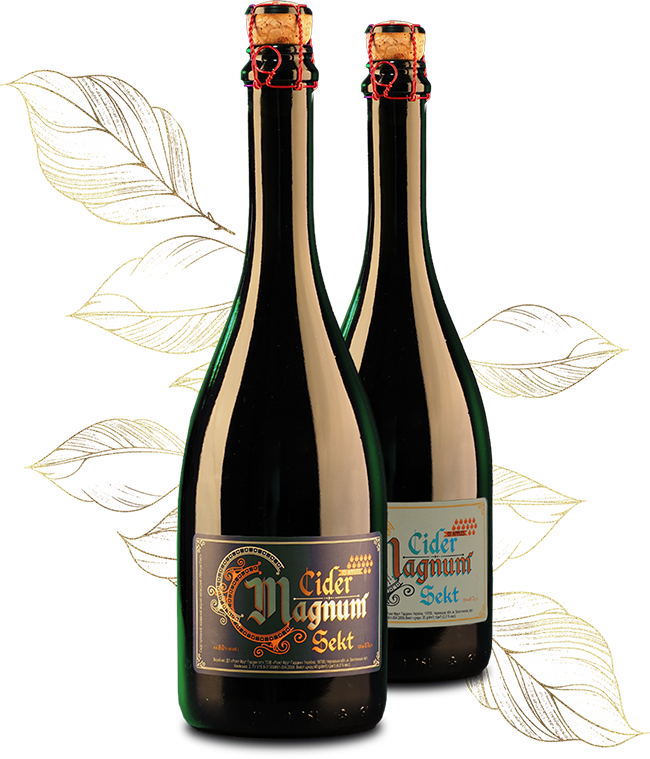 – So what was there about appearance?

– Magnum Sekt is uncompromising both in terms of quality and design. This is a holistic premium brand cider, which at first glance makes it clear that if you know a little bit about craft and cider, you will definitely not be able to miss Magnum.

– But why is cider so strangely called?

– Magnum means a large wine bottle. And we are not against such an association. However, it is inappropriate to call cider a younger relative of wine. Each drink is independent. Each one is great in its own way. Someone just likes wine terroir. And we love our home and the apple orchard next to it.
Sekt is a traditional definition of “sparkling” and natural gassing in winemaking

– How else is Magnum different from its competitors?

–  Well, for example, we know for sure that to make one liter of such cider we’ll need the juice of 13 apples. No more and no less!

In addition, due to the technology of double fermentation molecules of glutathione are formed in our cider, which is an important amino acid that slows down aging of body cells. We do not claim to have discovered the recipe for eternal youth, but enjoying Magnum Sekt you will definitely feel young and happy!